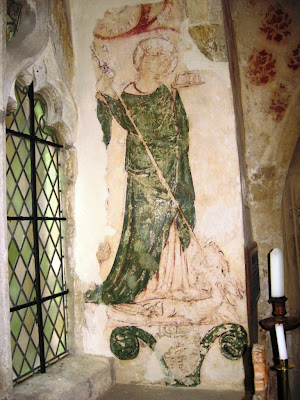 South Newington is to-day a small village, just off the A361, the few houses unfortunate enough to be on the main road giving no hint of the more substantial (and rather attractive) Cotswold village behind.
The village has been existence since at least Saxon times. There was a probably a church here then, but the present building dates from the late Norman period, around 1150. It was extensively remodelled in Early Decorated style around 1290-1300, with an enlarged nave, tower, south and north aisles. The Perpendicular period (1450) added a clerestory to the nave and a fine pinnacled porch. The whole composition is delightful, and executed in the rich golden hues of the local ironstone.

Little of this prepares the casual visitor for the interior, however, which contains a superb collection of late mediaeval wall paintings. On the north wall of the nave, homely but crude frescoes show various scenes from the passion of Christ, and are unusual in their state of preservation and clarity: they depict the Entry into Jerusalem, the Garden at Gethsemane, a gruesome flagellation, Christ carrying the Cross, the Crucifixion and the Resurrection.

Yet even these pale (almost literally) in comparison with those on the north aisle wall. These were executed, unusually, in oil on plaster, giving them both a range of colours and vividness unusual in wall paintings, and their quality both of preservation and of execution is outstanding. The first shows the martyrdom of St Thomas a Becket. It is gruesome in its reality, a sword splitting his head as he prays before the altar, although the details of the soldiers are less distinct. Rarely, the face of Becket has survived, as the painting appears to have been covered over in the mediaeval period (Henry VIII ordered images of Becket to be defaced, as he considered it a portrayal of resistance against the Crown).

Next to this scene is another unique survivor, a portrayal of the murder of Thomas of Lancaster. He led the resistance to Edward II and was accused of murdering Piers Gaveston. For a period, his followers venerated him as a Saint and miracles were attributed to him. Further along the wall, the windows contain fine examples of mediaeval stained glass, depicting armorial devices and mythical beasts.

The next wall painting is regarded by some as the finest in Britain of its type. First, on the side of the window is a panel recording the Annunciation, above another panel showing St James with a donor, identified by his heraldry as Thomas Gifford. The next panel is the climax: an exquisite rendering of the Virgin Mary with the infant Jesus, framed in a Decorated Gothic canopy, with the two donors (Gifford and his wife Margaret) praying alongside. Mary’s robes are a beautiful green and red, and she holds a fleur-de-lys, while Jesus holds an apple – an ancient symbol of his acceptance of the sins of the world. Below is a pedestal with the Gifford coat of arms and a richly decorated lozenge-pattern border. Further along, another well preserved painting shows St Margaret killing a beast – the choice of subject possibly referring to the donor’s name.

Other wall paintings over the chancel arch and on the east end of the nave are less well preserved, although there are plans to restore them. I hope they succeed.
South Newington, Oxfordshire, OX15 4JF
Posted by David J at 13:02