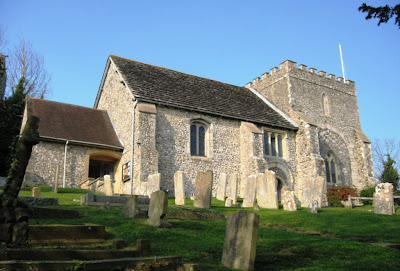 Bramber is a picture-postcard village of the sort that wins 'Britain in Bloom' prizes. Sandwiched between the equally pretty vllages of Steyning and Upper Beeding, it sits between the River Adur and the steep castle mound of Bramber Castle.
The castle is now an attractive ruin, but its church - the oldest Norman church in Sussex - is intact, and still in regular use. Situated on a hill above the village, the church was built at the same time as the castle in 1073, by William de Braose. Originally a chapel for the castle, it became the parish church in 1250, but declined along with the village as the River Adur silted up and trade declined. The church was used as a gun emplacement for attacking the castle during the Civil War in 1642, and was ruinous by the mid-18th Century. It was restored in the 19th century.

It's exterior is typically Norman - a strong, squat tower, which could also serve as a refuge, a short nave and thick walls. On the South Wall are the remains of an original Norman doorway, with a simply decorated arch. The original transepts and chancel have long since been demolished, and the church now consists only of a small west porch/vestry, nave and the tower, which functions as the chancel.

Inside, the church is dark and atmospheric. The eye is drawn to the chancel arch, a perfect example of rustic Norman romanesque, and is one of only three examples to feature the original Norman figure carvings on the capitals. On the left, these feature two simple human heads, but on the right the human heads are accompanied by animal carvings in relief, showing birds and what appear to be dogs or foxes - some of them with more birds in their mouths (possibly an early 'fox and goose'). There are more Norman carvings on the capitals of the infilled north cancel arch.

After a visit to the church, it's a only short climb to the lovely grounds of Bramber Castle - a perfect spot for a summer picnic.