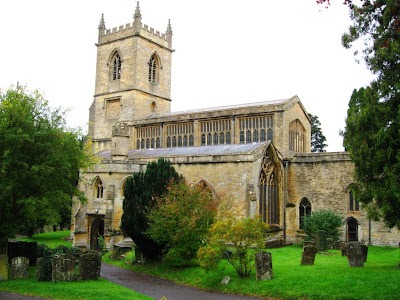 The historic market town of Chipping Norton lies rather in the shadow of its more famous neighbours of Stow-on-the Wold and Chipping Camden. But that is to its benefit, as its attractive market square and neo-classical Town Hall are less overwhelmed by tourists, and it has plenty to offer the visitor by way of things to do and see.
Foremost among these is its church, a splendid example of ‘wool-gothic’ (referring to churches embellished by the merchants and nobility made wealthy by the late mediaeval wool trade). Nestling in an attractive hollow just off the High Street, the church is primarily a mixture of the Decorated and Perpendicular Gothic styles.

Entry is through a rare hexagonal porch, whose ceiling bosses include a splendid ‘green Man’ and a sheep apparently holding the head of a wolf. Once inside, the eye is drawn immediately to the nave. Rebuilt in the 15th Century, it is a text-book example of perpendicular architecture: delicate, clustered columns soar to an enormous clerestory of panelled windows which flood the church with light, and include a ‘Cotswold’ east window above the chancel arch. The pulpit is framed by three splendid niches, also in the Perpendicular style, but sadly devoid of their statues.

The rest of the church is predominantly in the Decorated Gothic style. The sanctuary has a well-preserved three-seat sedilia and piscina, but most notable is the east window of the south aisle, a magnificent example of decorated flamboyance. The furnishings are less remarkable: the Tudor tomb of Elizabeth Rickardes and her second husband Thomas Rickardes is a lovely work in alabaster marble, but is sadly tucked away in the corner. Charmingly, her feet rest on a dog – cleverly concealing their difference in height!