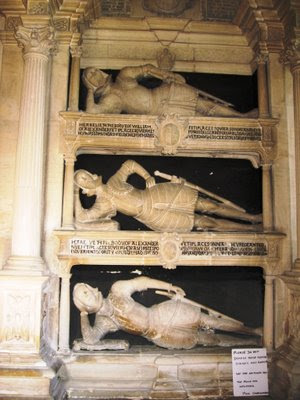 Situated in a classic small Cotswold village, St Mary is a charming, small church with some remarkable family monuments.
The church itself dates from around 1200, with a transitional nave arcade of round columns supporting Early Gothic arches. The arcades lean precariously, and the chancel arch is off-centre. The windows are mostly Perpendicular, from the 15th century. The oddest addition is the tower, built in 6 weeks in 1822. It has two supporting buttresses on the outside, which result in the west window being framed in an odd, tall arch.

But it is the contents which deserve the attention. First and foremost are the memorials of the wonderfully-named Fettiplace family. There are two sets of them, each with three reclining figures in an unusual tiered arrangement. The first, located in the chancel, was ordered by Sir Edmund Fettiplace (d 1613), for himself, his father and grandfather. Carved by a local mason, they are highly stylised (and rather stiff), and lie in full late Tudor-style armour, reclining on one arm, one above the other.

Situated adjacent in the tiny sanctuary, a similar arrangement commemorates Sir Edmund Fettiplace II (d. 1686) for his uncle, father and himself. These were carved by William Bird of Oxford, and are both more modern and more naturalistic, although again they recline in full armour. Opposite, the Neo-classical marble bust of Sir George Fettiplace (d.1743), the last direct male in his line, looks across at his ancestors. Their Manor at Swinbrook was reputedly the finest Tudor house in Oxfordshire, but was sadly destroyed in 1806.

Also in the chancel is a set of 4 misericords, dating from the 15th century and thought to have come from Burford priory. These depict a lion, a rather ugly woman spinning wool, a man weaving, and a thistle. In the arms between the seats, are more whimsical images of people and what appears to be a dead frog. Back at the west end of the north aisle, is a benefactor board recording the benevolence of yet more Fettiplaces, among others. There is a fascinating entry for the last named benefactor, in 1748: ‘Mrs Susannah Warren of Swinbrook, who gave £10 the Interest of which to be given to the Poor. This money is now lost’. Doubtless, thereby hangs a tale...

Across in the south aisle is a window containing fragments of mediaeval glass, recovered by the Vicar after they were blown out of the east Window by a stray World War II bomb. Outside in the churchyard are the graves of Nancy Mitford and her sister Unity. My favourite item is the poem on the chancel wall to the first Sir Edmund Fettiplace, erected by his wife :

“Read and record rare Edmund Fettiplace:
A knight right worthy of his rank and race:
Whose prudent manege in two happie raignes,
Whose publique service and whose private paines,
Whose zeal to God and towards ill severitie:
Whose temperance, whose justice, whose sinceritie:
Whose native mildness towards great and small:
Whose faith & love, towards friends, wife, children, all:
In life and death made him beloved and deer
To God and Menn; and ever famous heer:
Blessed in Soul, in bodie, Goods, and name,
In plentieous plants by a most virtuous dame,
Who with his heire as to his worth still debter
Built him this tomb, but in her heart a better”

Who says memorials have to be dull?