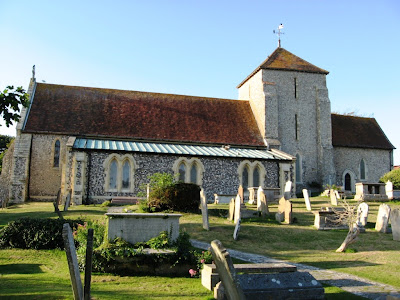 Rottingdean is nowadays part of Brighton, but as a settlement dates back at least to Saxon times (the name means 'the Valley of Rota's people') and still likes to think of itself as a village, despite the volume of commuting traffic and suburban sprawl around it.
However, there's no denying that the old centre still has a villagey feel to it, with old pubs (one dating from 1513), a proper village green (with pond), and houses built in a very authentic Tudor style fronted by some lovely gardens. Rudyard Kipling lived in the village for some years, as did the eminent pre-Raphaelite artist Edward Burne-Jones.

The huge, sprawling churchyard is entered through a lovely lytch gate, erected in 1897. The church itself dates in part from the Saxon period, although most of what you see now is essentially a Norman rebuild from the 12th century. The exterior is classic Sussex, all flints and red roof tiles, with a sturdy looking tower, erected in 1205 to replace an earlier structure that blew down in a gale. This was the scene of tragedy in 1377 when, during the Hundred Years' war with France, the villagers took refuge in the church during a French raid. The raiders set fire to the tower, burning to death all those inside. As the guidebook tactfully puts it, 'Now our visitors from France come in peace'.

Once inside, the interior is a little bit of a disappointment: the architecture is largely unadorned and unremarkable, although it is pretty enough. Unusually, the floor of the church rises up steps from the nave into the tower and then again up to the chancel. It is lit throughout by simple Early-English style windows or single decorated lancets. These contain the most interesting items in the church: a series of seven pre-Raphaelite stained-glass windows by Burne-Jones, whose daughter was married here.

The other item of special interest is the church cat: in the summer, he can often be found sitting in his basket in the lytch gate. He's very aloof - clearly having more important things to do than pander to visitors...