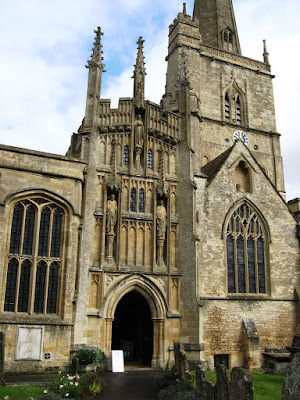 Yet another charming Cotswold town, Burford is attractively located on the River Windrush, and thankfully by-passed by the busy A40 road.
Its church, tucked away down a street adjacent to the river, is one of the Cotswold’s most remarkable and interesting churches, and is definitely worth a detour on any visit to the area. As well as rich and interesting furnishings, it encompasses the full range of mediaeval building styles from Norman through to Perpendicular. This is immediately apparent from the exterior: a Norman tower (with later spire) sits astride a Decorated Gothic transept and adjacent chapel, but the entrance porch and Lady Chapel windows are pure Perpendicular.

The interior is a complex space: the nave is almost hidden amongst a warren of chapels, each containing notable tombs and furnishings. Largest of these is the Lady Chapel, built in 1200 as a separate Chapel for the Merchant Guild. It was later remodelled and joined to the Parish Church in the 15th century. It contains the memorials to the Sylvesters, one of the most powerful of the towns’ merchant families, and a beautiful altarpiece, with delicate stone carvings. Across the nave, in the north aisle, is a Norman Font, adorned with 14th century carvings and the graffiti of one Anthony Sedley, a member of the puritan ‘Leveller’ sect who was imprisoned here by Cromwell in 1649.

Further along the north wall is the historically important 16th Century memorial to Edward Harman, the barber/surgeon to Henry VIII. Carved in the renaissance style, it includes the first recorded images of American Natives in the British Isles, supposedly because Harman had trading interests in Brazil. The carvings look astonishingly modern in style, and contrast sharply with the more traditional carvings of mourners below (Harmann clearly had a large family – there are six girls and nine boys, along with his wife).

The crossing features heavy Norman arches, and in the north transept, we find a remarkable open-frame clock, dating from 1685, with its original mechanism still intact (and working). To the north of the chancel, another chapel is filled – almost literally – by the tomb of Sir Lawrence Tanfield, a Judge and Chancellor of the Exchequer to James I. Lady Elizabeth Tanfield was, by all accounts, highly unpopular and she was refused permission to erect a tomb in Westminster Abbey. The church in Burford also refused, but to no avail: she prevailed, and in 1628 erected a splendidly ornate neo-classical memorial in marble, with a tall canopy surmounted by pinnacles and their Coat of Arms. At their feet is the charming figure of their grandson, Lucius Cary, resplendent in green and gold armour. He was later killed, fighting on the Royalist cause in the Civil War.

Across the Chancel, remodelled in the 19th century, is yet another chapel, this time with a rare 16th-Century inscription from William Tyndale’s translation of the Bible into English. Finally, between the south transept and porch, is a chapel dedicated to St Thomas. Converted into the Corporation Pew after the dissolution, it contains a splendid decorated gothic tomb, with faint traces of its original colouring. Before you leave, the other furnishing worth finding is a slab high on the wall at the east end of the south aisle: dated to 160 AD, the ‘Epona Stone’ is the oldest artefact in the church, and is variously described as depicting the Celtic goddess Epona, or the flight from Egypt (possibly from a Saxon church – in which case the date must be rather later).

In all, this is a remarkable church in a lovely setting. Burford also has some good pubs and tea-rooms in which to refresh yourself with more earthly delights after your visit. If you have time, the nearby villages of Widford and Swinbrook also have contrasting churches worth a look.
Church Green, Burford, Oxfordshire, OX18 4RY
Posted by David J at 13:01