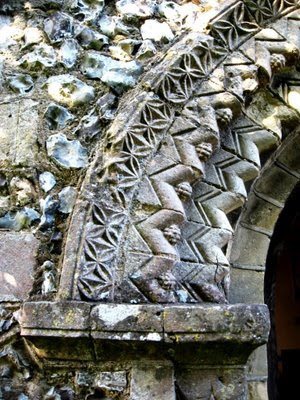 Tortington church is located in a tiny hamlet, between Arundel and Ford. Erected to serve the lay members of the now-ruined Tortington Priory half a mile away, this small 12th-century church is now in the care of the Churches Conservation Trust. Reached by a short path from the nearby lane, it is a lovely peaceful spot.
Built around 1140, the church is essentially unchanged since that period, although the south aisle fell into ruin and was only rebuilt in the 19th century. From the outside, the walls are attractively faced with flint, with a roof of red tiles, and a wooden bell-cote. This contains two bells, one mediaeval and one from 1873.

But the most striking external feature is the south doorway, executed in Caen stone, a perfect example of Norman Romanesque with its detailed zig-zag carving. Once inside, the simple interior is charming, with small single-light Romanesque windows, although some are Victorian copies. Dominating the space is a Norman chancel arch, again in Caen stone. The decoration is unique, with a band of alternating animal heads, executed in a heavily stylised fashion, with leaves, feathers and goggle eyes. It is thought they betray a Scandinavian influence.

Equally impressive is the Norman font, of the same date as the chancel arch, and decorated with a very fine relief of Romanesque arches, alternating with honeysuckle and shell ornamentation. On my visit, it was filled with offerings for the harvest festival. The pulpit dates from the 17th century, and has a fine decorative panels.

Once back outside, just by the church gate is a very ancient petrol-station pump, next to an equally aged-looking shed, covered in ivy. I have no idea how or why it got there - it can't have a been a very convenient spot to fill up!
Off Ford Road, Arundel, West Sussex, BN18 0FD
Posted by David J at 13:00