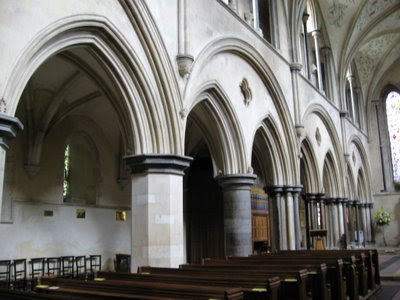 To-day, Boxgrove is by-passed, sandwiched between the A285 and the A27 east of Chichester. But in the Middle Ages, this was the site of a magnificent priory, founded in 1117.
The ruins of the priory buildings are the first things you notice when arriving down the gravel path to the church. As well as the imposing remains of the guest hall, at the side of the church are delightful fragments of the cloister, now a garden and, entering the church precinct, the remains of the Norman nave.

But enough of the ruins, for after the dissolution the parish took over the crossing and chancel as its parish church, preferring this to the previous parish nave, which they demolished. Entering through the substantial porch, you can see why, for the chancel is magnificent: one of the outstanding mediaeval buildings in Sussex, and of a quality surpassing the Cathedral in Chichester.

The crossing and transept arches are huge, although the transepts themselves are rather gloomy, courtesy of heavy oak galleries and dark stained glass. This draws the eye to the chancel itself (now used as the nave), with the arcade piers - all different - gradually changing in style from Norman to Early English as they progress towards the East End. Simple Caen stone gives way to delicate clusters of black Purbeck marble, with pairs of pointed arches framed by round-arched blind arcades. Above these is a generous Early English clerestory, and above that a high stone vault, which retains its 16th-century decorative scheme.

The walls are lined with the bases of tombs, presumably of former Priors, their effigies long removed. But in the chancel is the chantry built for the 9th Lord de Warre and his wife in 1532. Although never used - a dispute with Henry VIII caused the Lord to move estates before his death - it is a work of astonishing quality. Relief carvings cover every inch, with heavy bosses dripping yet more decoration. The subjects possess a delightful humour in their execution.

The Priory has an excellent choir, who take advantage of the perfect acoustics to sing plain-chant and polyphonic choral pieces in keeping with its monastic tradition.
Church Lane, Boxgrove, West Sussex , PO18 0ED
Posted by David J at 12:58