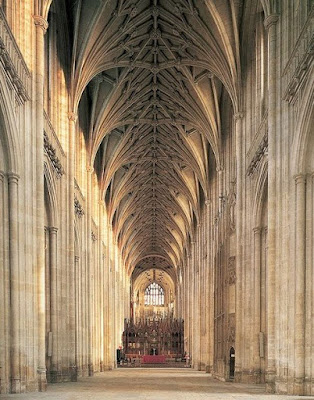 Winchester is one of my favourite places to take foreign visitors. It’s easily accessible and makes a perfect day out from London in summer.

It’s a historic place: it was the capital of Wessex and subsequently England until the Norman Conquest in 1066. Not surprising then, that a large cathedral was built here around 648 AD. All that remains of this is its foundations, clearly marked next to the present building.

And what a building that is. At 556ft (170m) the longest mediaeval cathedral in Europe, it illustrates perfectly the developments in mediaeval architecture from the Norman Romanesque of its initial building in 1079, through Early English and Decorated (High) Gothic to the Perpendicular of the rebuilt west front and nave of 1400. There are several impressive chantry chapels and a beautiful 13th century retro choir. Richard I was crowned here in 1194, and Henry IV (1401) and Queen Mary (1554) were both married here.

But it is also full of other points of interest: the graves of Jane Austen, William II, and the Saxon kings Egbert, Ethelwulf and the Danish Canute; mediaeval stained glass and frescoes; pre-Raphaelite glass from Burne-Jones; and in the ancient library, the Winchester Bible, one of the pre-eminent mediaeval illuminated books in Europe.

The area around the cathedral is also delightful for a walk, and the award-winning refectory is a good place to eat. My favourite iwalk is along the lovely River Itchen to the church of Saint Cross (see separate blog). On a high summer’s day, it’s a perfect way to spend an afternoon.