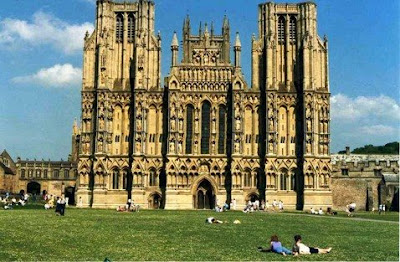 Wells is England's smallest city, with a population of around 10,000, but at its heart contains one of the best preserved collections of mediaeval ecclesiastical buildings in Europe. It's close enough to Bath to make an easy day out.

The centrepiece of the city is the Cathedral itself. Although there has been a church here since 705, the present building was begun in 1180 as an abbey church, with an associated monastic community. It was the first church in England to use the then-new pointed gothic arch throughout. Like many cathedrals, it was built over several hundred years, and the architectural styles reflect this, with a transition from Early English Gothic through to Perpendicular.

The bulk of the building - nave, west front and the crossing - was completed by 1245, and the amazing Chapter House by 1306. The central tower was enlarged and the eight-sided Lady Chapel at the East End completed by 1326. The most dramatic feature of the interior is a pair of inverted 'scissor arches' underneath the main arch of the nave at the crossing, inserted around 1340 to prevent the enlarged tower collapsing. They've done their job well, as the tower is still standing, albeit without its spire, which burned down in the 15th Century.

As ever, it is the detail which provides the delight: the carving at the top of the main nave columns depict birds and animals, mythical beasts and ordinary men and women going about their everyday lives in the 1200s. The stonemasons had a sense of humour too - they included a man suffering toothache and a fox running off with a goose. The East Window contains a Jesse Tree, dated at 1340; and the Chapter House, with its central column and elaborate fan-vault, is truly sublime. And like many English cathedrals, it still has its original astronomical clock, dating from 1390.

But many regard the glory of Wells to be its West Front, built between 1209 and 1250. With the two towers, it is 100 feet high and 150 feet wide - twice the width of the Nave behind. This was essentially designed as a huge sculpture gallery, with niches for over 500 figures. The West Front is unique in retaining over 300 of its original medieval statues - claimed to be the largest single collection of original mediaeval statuary, in situ, in Europe. An added delight is that the Cathedral Green is still preserved in front of the West front, affording a splendid picture-postcard view.

Nearby, other buildings worth visiting are the remains of the moated 14th century Bishop's Palace; the Vicar's Close - a whole street of 14th century houses and an early example of mediaeval town planning; the four 15th Century entrance gates which guard the Cathedral precinct; and the impressive 15th century parish church of St Cuthbert, with its fine Perpendicular tower.

Finally, don't miss the wells that give Wells its name: these natural springs, attractively modelled into a water garden, produce thousands of gallons of water an hour, which flows into the moat and then via special gutters along Wells' main streets.