Edington: The Priory Church of Saint Mary, Saint Katharine and All Saints 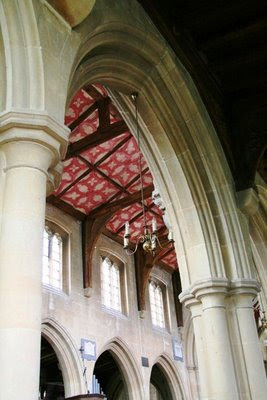 Tucked away in rural Wiltshire, half an hour’s drive from Bath, Edington is one of those villages that makes you realise that the fabric of English history is not just to be found in its cities, but in its villages as well.

The village has two claims to fame. First, as the place where the young King Alfred the Great defeated the Danes in 878, safeguarding both the Anglo-Saxon heritage in England, and forcing the Danes’ subsequent conversion to Christianity.

The second claim to fame of Edington is unquestionably its church, dedicated to St Mary, Katherine and All Saints. Formerly a Priory, it was founded around 1351, and built in ten years – an amazing speed for the time. The church architecture portrays the transition from the Decorated Gothic to the English Perpendicular style, particularly in its fine set of windows. But is also notable for the impressive roof, decorated in red and white, which dates from 1663.

There are also some notable tombs, dating from the 15th-17th centuries, with superb, delicate carving. After the reformation, the Priory became the parish church, which explains why such a small village possesses such an amazing building. It is now looked after lovingly with an active 'Friends' group, and is beautifully maintained.

Over the years, Edington has become famous for its August festival of ecclesiastical music, which celebrated its 50th anniversary in 2005. Regularly featured on BBC Radio 3, there are up to four choral services a day, with choirs visiting from churches and cathedrals all around the UK.

After visiting church, I’d recommend going around the corner to the Lamb Inn – a lovely 400-year-old pub with real ales and an impressive food menu.