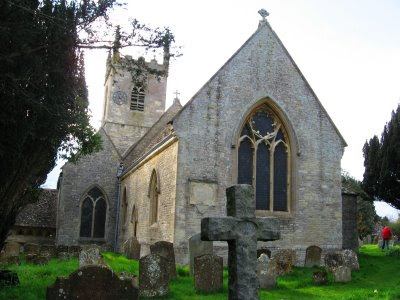 Islip is another of those ancient Oxfordshire towns: there was an Anglo- Saxon settlement here, probably including the royal hunting lodge of King Ethelred (the Unready), which became the birthplace of the subsequent King (and Saint) Edward the Confessor in 1004. Edward is alleged to have given the land and buildings of his birthplace to his newly-established abbey at Westminster in 1065. The Dean and Chapter of the Abbey still retain the right to nominate Islip’s Rector.

Although there must have been a church here in Saxon times, the present building dates to the end of the 12th century. It was substantially rebuilt in the 14th century, and all that remains from the earlier church is the impressive transitional arcade between the nave and north aisles, and the small round-headed window in the south aisle. The impressive pinnacled tower was added in the 15th century. The chancel was burned down during fighting in the Civil War in 1645, and rebuilt by the Rector, Robert South, at his own expense.

The church suffered from a rather severe restoration in 1861, which swept away many of the fittings of interest, as well as covering up some interesting mediaeval wall paintings. Today, the most interesting items include a 15th century octagonal font, some attractive 18th century memorials and, above the arch containing the painting of St Edward, a death mask reputed to be that of Richard Busby, the headmaster of Westminister School, for whom the Reverend South acted as executor.

Another famous rector was William Buckland (1846-56), the first professor of geology at Oxford, who discovered the fossilised bones of a giant reptile which he named Megalosaurus (“great lizard”) and wrote the first full account of what we now know as a dinosaur. He is buried in the churchyard.