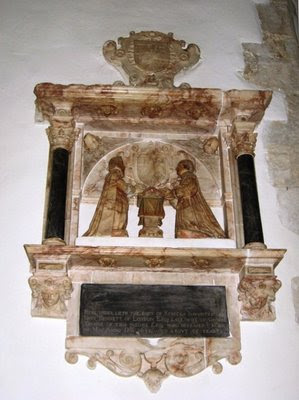 The old village of Sidlesham, almost by-passed by the B2145 from Chichester to Selsey, is a perfect picture postcard: a clutch of old thatched cottages along small lanes, clustering around their mediaeval church.

The church itself is picturesque enough, but merits a visit on the strength of its jumble of contrasting, almost clashing architectural styles, providing a fascinating challenge for the would-be architectural detective. Here are elements of Early English and Decorated Gothic, Tudor, Georgian and Victorian, its walls (inside and out) peppered with blocked-up windows, doors and arcades, old stone mixed with bricks and plastered walls.

A look at the church plan provides a clue to this complexity: the earliest elements of the church are the transepts, built around 1200, with tall and narrow Early English single-lancet windows to the north and south. The aisled nave was added about 1220, again in a simple early gothic style. Research has shown that there was once a large chancel, probably built at the same time, with either aisles or chantry chapels. These were demolished in mediaeval times, leaving the outline of the arcades in the new walls. A 14th century window survives in the south aisle, but is empty of its tracery. In the 15th century the tower was added – possibly using the stones form the demolished chancel – and contains two bells, one dated 1390.

The habit of rebuilding seems to have carried on unabated. The Tudors and Victorians both added large windows, the Tudors through the walls, the Victorians in the roof for a now-lost gallery. The 18th century brought a rustic brick porch, and a vestry off the north transept, now demolished. Yet the biggest change came in 1820, when for some reason the chancel arch was removed, bringing the nave and sanctuary together in a single, large (and architecturally, not entirely successful) space. Modern times have given the church a new East window, in a rather severe Perpendicular.

The church also has some furnishings of interest: the font dates back to the original building, and adjacent is an ancient ecclesiastical tombstone on which can be seen a faint outline of a cross. Another rare survivor is a wooden memorial cross to Thomas Greenwood (d. 1658). This survived after having been used by some enterprising carpenter as a door lintel in a nearby cottage, before being rescued and thoughtfully being brought back into the church. On the south wall are the traces of a mediaeval mass sun-dial. But most puzzling is a marble memorial to Rebecka Taylor (d. 1631), which depicts her facing her husband, yet the space for his name is empty: did he desert the village after her death?