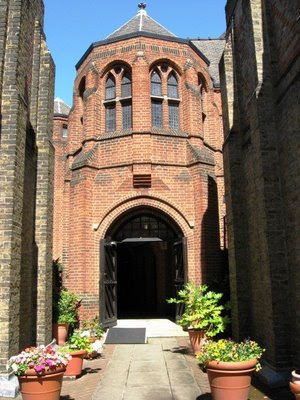 Hidden away behind Sloane Square tube station, amidst the rows of stuccoed terraces, lies the small chapel of St Mary's Bourne Street.

There's nothing especially notable about the chapel itself, a competent version of Victorian Early English gothic, executed in red brick in 1874. Although it has some rich furnishings, and is a quiet and intimate space, what makes it stand out is its services.

For here is possibly London 'highest' Anglo-Catholic church: its mission to keep alive the catholic tradition within the Church of England. It's not everyone's liturgical cup of tea, but it attracts a varied and loyal congregation.

The services are elaborate in their ritual, rich in liturgy and especially rich in music. The high masses - sung, of course, in Latin - are wonderful experiences for lovers of divine music, and include Handel, Mozart, Bach, Allegri, Palestrina, Byrd, Tallis, Haydn - and many more. The vestments are equally sumptuous, and the whole spectacle is swathed in incense.

Strangely, the rumbling of underground trains beneath - they can clearly be felt through the floor - only adds to the feeling of mystery...
Bourne Street, Chelsea, London SW1W 8JJ Website