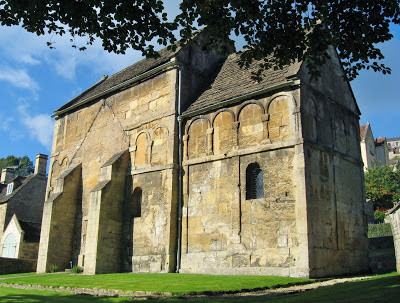 Bradford-on-Avon is a lovely historic town close to Bath, with a handsome mediaeval bridge, an impressive 14th Century tithe barn and a lovely parish church of Norman foundation.

But the most famous building in Bradford-on-Avon is undoubtedly the diminutive church of St Lawrence which, by an accident of history, is arguably Britain's most perfectly preserved Saxon church. A church was founded on the site in AD 705 by St Aldhelm, although most archaeologists agree that the present building dates from the reign of King Aethelred II (978-1016).

Its history is rather obscure, but appears quite early on to have been converted into secular use, with other buildings growing up around it, and extra floors inserted into its nave and chancel. These were removed when it was rediscovered and restored in 1856, although the walls still show evidence of them. There are no remaining additions from later periods, so the building we now see is purely Saxon.

The church is tiny - the nave is just 25ft long and the chancel is 13ft long, although it feels larger as it considerably taller than it is wide. It has lost its south porticus, but the north porticus is still intact. Decoration is restrained: the exterior has Romanesque blind arcading, and the interior has simple mouldings around the narrow door arches, but the most interesting carvings are those of two bearded flying angels on the east wall of the nave. These were found nearby and placed here in 1855. They were probably originally part of a much larger sulptural scheme.

There are only a few, small windows, giving a dusky light. Although the interior is bare of furnishings, this is nevertheless an ancient and atmospheric space. It is still used for worship by the congregation of the adjacent Holy Trinity.