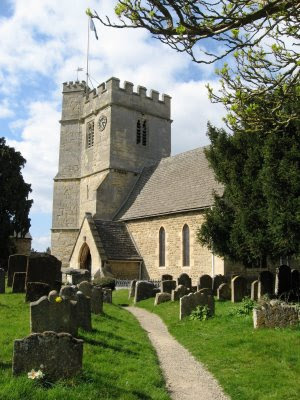 There is little evidence today that Old Headington was once the site of a great Anglo-Saxon royal manor. It predated Oxford, which was carved out from its lands. Modern Oxford has since bitten back, engulfing the settlement and turning it into a suburb, albeit it one with a charming village centre. But it was a seat of royalty for much of the Anglo-Saxon period and into the Norman era: King Ethelred is though to have been born here, and Henry I resided for a time in the parish.

So it is perhaps appropriate that a charter from Henry I in 1122 is the first record of a church on the site, although it seems likely there was an earlier Anglo-Saxon foundation.

The first stone chancel was built around 1140, and a century later the church was enlarged by the addition of a south aisle, with an arcade of two bays, along with the ground stage of the south tower. The chancel was rebuilt at the end of the 14th century, and around 1500 the upper perpendicular stages of the tower were added (rebuilt in 1679). The south porch was built in 1598. Two stages of building in the late 19th century added additional bays to the nave and the rather severe north aisle.

The church now sits in an idyllic churchyard, full of 17th and 18th century tombs, many in a fine state of preservation, and a 15th century cross, much restored. On entering, you are immediately struck by the spaciousness of the church, largely thanks to the Victorian additions. There is little of interest in the north aisle, but the 13th century Lady Chapel in the south aisle has attractive lancet windows.

The piece de resistance is, however, the original chancel arch: a confident Norman work from the original building around 1140, it has abundant zig-zag carving on the arch, the shafts decorated with studded trellis and spiral patterns, below cushion capitals. Rather oddly, it sits beneath the outline of a pointed arch, thought to date from the 13th century rebuilding. Through this arch is the 14th century chancel, where the eye should be drawn up: the roof corbels have wonderful carvings of a bishop, two angels and a heavily bearded man.

The only fitting of real interest is a lamp, bestowed by Sir Hugh Pluggenait in 1142, and still burning today (albeit powered by electricity). Outside, many of the tombs are worth a look, but the most interesting is that of one John Young, who died, aged 100, in 1688. His grave has both a headstone and footstone, in the manner of a bed, both surmounted by skulls. The footstone bears the inscription:

The church today is carefully looked after by its congregation, with worship following the Anglo-catholic tradition.