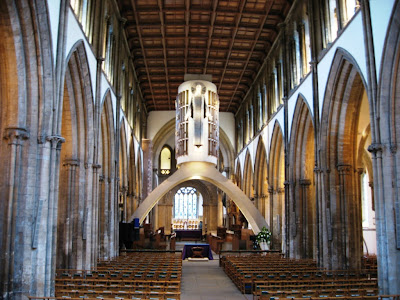 Tucked away in the suburbs of western Cardiff is the ancient cathedral seat of Llandaff. Easily overlooked, it’s a charming, quiet spot, with a village-like feel and, unlike many cathedral towns, is not over-run by tourists. The cathedral itself is smaller and more intimate than many of its English equivalents.

Until the late 19th century a small town in its own right, Llandaff is one of the oldest Christian sites in the UK, with a colony founded by St Dyfrig in the 6th Century. His leadership was followed by St Teilo and St Euddogwy (great names, these Welsh saints..) and these three now form part of the Cathedral’s dedication, along with St Peter and St Paul.

The present building was begun in 1107 after the Norman conquest, to replace the earlier church, of which only a stone cross survives. The Norman church was itself rebuilt in the early 13th century, and the bulk of the fabric dates from this period: the Nave and West Front were completed by 1220. The Lady Chapel was added in 1287 and the outer aisle walls rebuilt, and the square Jasper Tower completed in 1485. After the reformation, the church fell into ruin as the income from pilgrims to the shrine of St Teilo dried up. After a partial (and rather unsympathetic) restoration in the 18th century, a more complete restoration in the 19th century delivered much of what can be seen to-day, as well as its pre-Raphaelite furnishings, most notably a triptych by D G Rossetti and a ceramic reredos by Burne-Jones.

Unfortunately, the cathedral was brought to almost complete ruin again in January 1941, when it received a direct hit during a bombing raid. The subsequent rebuilding largely restored the earlier fabric, but with one spectacular addition: a new organ case built on a concrete arch in the centre of the nave, surmounted with a huge aluminium statue of ‘Christ in Majesty’ by Sir Jacob Epstein. Love it or hate it (and I think I’m in the latter camp), it now defines the interior cathedral space, and it certainly unique and dramatic. And the effect when it is played is equally astonishing - like many cathedrals, Llandaff is best experienced with music, and there is an active programme both of sung services and concerts - see web-site for details.

Although there is a small shop, there are no catering facilities, but there are a few cafes in the surrounding streets: why not treat yourself to a traditional Welsh tea after a visit?