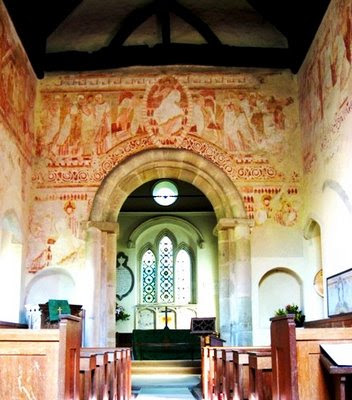 Just off the busy main road between Brighton and Hassocks lies the little village of Clayton. Nestling at the foot of the South Downs, it is a quiet spot, known locally for its two windmills, called Jack and Jill, after the English nursery rhyme.

Most visitors are ramblers, walking the South Downs long-distance footpath. And most probably overlook the small, squat church, with its wooden shingle turret, which seems to tuck itself into the hillside.

The interior immediately gives away its antiquity. It is mentioned in the Domesday Book. The nave is Saxon, pre-dating the Norman conquest of 1066, with an ancient Romanesque arch separating it from the chancel. Other elements suggest Norman and later Gothic additions.

But what draws the eye are the frescoes, which adorn the nave walls: here is one of England's most complete set of early mediaeval church wall-paintings. Although the age is disputed, the consensus is that they are late 11th or early 12th century, although some believe that they may pre-date the Norman conquest.

The theme is judgement. Above the chancel arch is Christ seated in glory, attended either side by the apostles. To the left, on the north wall, a great procession of clergy, kings and lay-people walk towards the chancel and a depiction of Jerusalem, to be met by St Peter: above the door, the Antichrist (dressed as a king) is shown being cast down by an angel. A similar procession occurs on the south (right-hand) wall. The western part of this frieze is missing, but there is enough to suggest this was the depiction of hell: there is a wonderful rendition of a beast being ridden by a devil, trampling one of the damned under foot. A series of framed drawings of the frescoes is provided at ground to aid their interpretation.

Elsewhere, on the south wall of the chancel is a small memorial brass, commemorating a 16th century Rector. Although depicted in his vestments (how little they have changed!), the memorial is in surprisingly modern English. It reads: 'Of ye charite pray for the soule of Mayst: Richard Idon, pson of Clayton and Pykecu, whiche decessed the VI day of January the yere of our Lord M V and XXIII on whose soule Jhu have mercy amen.'

The building has a few other items of interest, notably a Kempe window and a weather vane from 1781. In summer, it hosts a delightful flower festival.