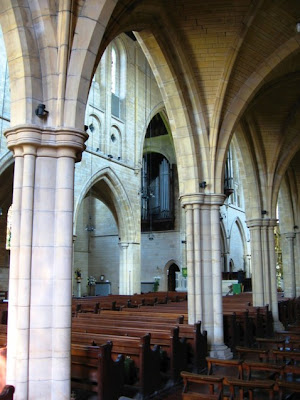 It's interesting how many of the great Victorian churches are located in surprising places, and not just those in rural corners. St Cuthbert's, my parish church, is tucked away in a leafy West London crescent and would never be found by accident.
And so it is with Port Talbot: the South Wales town is almost universally associated in most people's minds with the huge nearby Steel Works. But it is also home - among other things - to one of Wales's most splendid Victorian churches, St Theodore's.

The church was the brainchild of Miss Emily Charlotte Talbot, the local landowner and heiress of the Talbot family fortune. She and her father were largely responsible for the development of the town as a major port (which bears their name), but in 1876 her brother, Theodore Mansel Talbot, was killed in a riding accident, and her sister Olivia had also died young, in 1894.

The church was built in their memory, and consecrated in 1897. It became the parish church in 1901. The unusual dedication - to the 7th century Greek monk who later became Archbishop of Canterbury - is in memory of Miss Talbot's brother.

The architect chosen for the new church was John Loughborough Pearson (1817-1897), one of the foremost names of the Victorian Gothic Revival, and responsible (among many others) for Truro Cathedral, Brisbane Cathedral, St Augustine's in Kilburn, and a host of restorations on other English cathedrals.

For Miss Talbot, he designed a church on a cathedral-like scale and of the highest quality. The church is traditional in plan, with transepts, nave aisles, north and south porches and a Lady Chapel extending from the south aisle. It is all executed in the Early English Gothic style, although some of the fittings and architectural detailing is in the more elaborate Decorated Gothic. An intended west tower was never built so, unusually, there is no west door. The exterior is in the local sandstone with bath stone dressings, with the interior faced entirely in ashlar.

Inside, the west end comprises a large vestibule, which would have been the vault under the western tower, had it ever been built. This opens up into the nave of five bays of tall gothic arcades, surmounted by a triforium of romanesque blank arcades, pierced with quatrefoils, rising in turn to a clerestory of paired Early English lancets. The extraordinarily lofty nave roof is a wooden arched truss, and continues across the crossing, giving a great sense of spaciousness. The aisles, Lady Chapel and Chancel are all vaulted. Both East and West windows consist of three tall Early English lancets.

The fittings are of an appropriate quality for such a building: both pulpit and font are executed in marble, and the Lady Chapel and South Aisle have windows by Clayton and Bell. Two of these, depicting the Archangels Michael and Gabriel, commemorate Port Talbot's only holder of the Victoria Cross, Lieutenant Rupert Price Hallowes, a member of the church who was killed in Hooge, Belgium, in 1915.

The Lady Chapel also has a curtain screen by William Morris, impressively detailed wrought iron screens, and the sanctuaries of both the Lady Chapel and the High Altar have pavements of beautifully preserved encaustic tiles. In addition, an imposing gilded Victorian reredos has recently been installed behind the High Altar, brought from St James the Great, Cardiff. This was originally thought to have been by Comper, although is now thought that it may have been a product of his workshop.

The church had suffered terribly from the effects of industrial pollution over the years, with both stonework and stained glass badly blackened, but was completely restored between 1996 ad 2002 after a massive fund raising effort secured over £500,000. The interior is now a light and very impressive space, although it can - because of its sheer scale - feel a little empty in between services. On the other hand, it makes a splendid setting for the traditional Mass, with excellent acoustics and plenty of space for incense to rise!

The parish is a busy and active one, and is in the traditional Anglo-Catholic tradition. It has recently raised yet more funds, for a new Youth Hall adjacent to the church, which has now been completed. (The parish hall is also undergoing refurbishment at the time of writing). There are two other daughter churches within the parish: full details of these, and of all events at St Theodore's, can be found on the parish website.