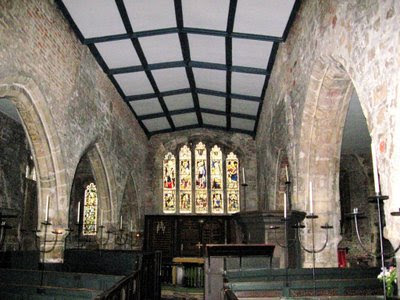 Phrases like 'atmospheric', 'hidden gem' and 'perfectly preserved' often get bandied about when talking about old buildings, but this church, tucked away from the busy, touristy streets of old York, fits them better than most.

For a start, it really is hidden: the churchyard lies quietly secluded from the busy streets of York, accessed by narrow alleyways. It would not look out of place in a remote village. And it is exceptionally well preserved: such restoration as was undertaken by the Victorians seems to have been extraordinarily sensitive. It is about as close as you can get to how a church would have looked after the Reformation: dark, quiet, homely, with uneven floors, high box pews and plain walls. With candle-light it must perfectly evoke the late 17th century. It is rightly a Grade I listed building.

The church actually dates back to the 12th century, although the current building owes rather more to the 13th-15th centuries. The box pews are recorded as being repaired in 1633, and new ones added in 1700-1725. The pulpit dates from 1695.

But the church's most notable feature - as is so often the case in York - is its mediaeval stained glass. The windows are Decorated and Perpendicular in style. The best is the late Perpendicular east window: this dates from 1470-71 and was presented by the then rector, John Walker. The glass depicts saints, including St George and St Christopher, as well as heraldic shields, around a central panel in which a representation of God as the Trinity holding the dead Christ, with the donors at his feet.

Other features include a simple 15th century font and wall plaques recalling Lord Mayors of York, including the infamous 'Railway King', George Hudson.

Whether you just want ten minutes' peace and quiet, or some spiritual solace from the touristy rush that is modern York, a visit is a must.

The church is in the care of the Churches Conservation Trust.