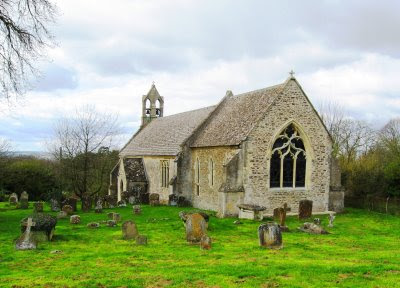 Elsfield is a charming little village just north of Oxford, perhaps best known as the final resting place of John Buchan, former Governor of Canada and author of The 39 Steps, who died in 1940. The village is picture-postcard pretty, and runs along a little lane from the Marston junction on the A40. Quickly, you leave the dual carriageway behind and find yourself in wooded, rolling countryside, with cottages, farms and the odd barn conversion along the way.

The church was built around 1160-80 but rebuilt in the 13th century, when it was dedicated to Thomas a Becket, following his martyrdom in Canterbury Cathedral. A century later, the beautiful east window was inserted, in a delicate and flowing Decorated Gothic style. A chapel was constructed on the north side of the nave around the same period, but nothing of this now survives (traces of filled in arches were visible until 1837). Thereafter, the church remained relatively untouched until a fairly thorough Victorian restoration in the mid 19th century.

Today, the church has an attractive setting, surrounded by cottages and with the handsome old Rectory next door, sitting amidst a well-kept graveyard. After this gentle beginning, the interior comes as something of a shock, owing to the recent installation of a “parish room” at the west end of the nave. This is a clean, bright space, separated by modern glazed wood panels with echoes of a mediaeval rood-screen. Whilst this is an excellent use of the space (and, overall, is to be applauded) the brightness does contrast rather strongly with the rest of the interior.

Turning east, the main architectural feature of the interior is the chancel arch, which retains the bases, pillars and capitals from its original building around 1160-80. This is surmounted by a rather later arch which probably dates from the 13th century rebuilding, around 1250. Inside the chancel, there are fragmentary remains of wall paintings behind the altar, most likely dating from the 15th century. These frame a rather bright mosaic of the Last Supper, installed in 1860 and the work of Antonio Salviati (who also made the reredos at Westminster Abbey). Other furnishings of note include the altar rails (1627), a Jacobean pulpit and the ancient font of c. 1200. This last was one of the reasons for our visit here, as one of my partner’s ancestors was baptised here in 1718.

The graveyard contains some 17th century tombs, but is most visited for the circular memorial of John Buchan, on the upper section, from which there are beautiful views over the surrounding countryside.