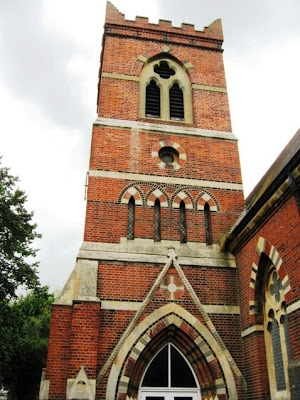 The days may be numbered for this familiar landmark in Hove's Blatchington Road shopping area: formally declared redundant, this Victorian grade-II listed building is scheduled for demolition despite the pleas of the Victorian Society, probably to be replaced by modern flats. (Although the congregation will continue to worship in the adjacent church hall for the foreseeable future).

Built in 1863-68 to the design of a local architect, J Woodman, Holy Trinity came about as the result of Hove's early Victorian growth, which meant that the old church of St Andrew's could no longer cope with the bustling congregations. The erection of this new church was largely thanks to the energy and devotion of its first incumbent, the Rev. Fraser Taylor, who at the time was curate at old St Andrew's, Hove.

The design was in a form of Lombardic-Gothic style, of red brick, with a colourful mixture of black and yellow brick and Bath stone decoration externally. The windows are a mix of very narrow lancets and early Decorated Gothic forms, some with plate tracery. It has a very attractive tower (an intended spire was never added), but the most notable feature, to the east, is a very rare external pulpit, erected in 1919, which has been scheduled for retention. The idea of this pulpit was to preach open-air sermons in the summer, which would make the church's presence more visible to local residents. Now, it is somewhat oddly located in the Vicarage Garden.

Internally, the church is less notable, although the elaborate capitals on the piers beneath the Gothic arcades are well done, and the sanctuary is a nicely proportioned space. There are a few memorials inside, most notably that of Fraser Taylor himself, and some attractive stained glass, mostly by Ward & Hughes of London. Also notable is the damage from incursions of damp, due largely to failing gutters: a major cause of such problems in churches.

But the church's real undoing was the erection of the much larger and grander All Saints, Hove, a few minutes' walk to the east. This drew off much of the congregation, and the first attempt to close Holy Trinity came as early as 1931. It has soldiered on, largely thanks to a very loyal congregation, but has now been formally declared redundant by the Diocese of Chichester.

There has been some local opposition to its closure, largely because it is a distinctive and attractive local landmark. It is not in the top rank of Victorian church architecture by any means, but I have a nasty feeling that any replacement building - whatever form it takes - will not be anything like as uplifting or interesting an addition to the urban landscape.

It was opened to the public for a last look in September 2008. After that, the future timetable - and what happens next - is uncertain.