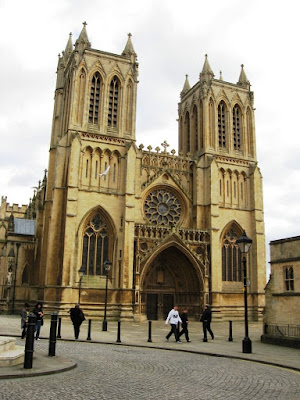 For much of England's history, Bristol was the second city after London, and despite extensive bomb damage in 1940-41, traces still remain of its mediaeval past.

One of the best surviving buildings is its Cathedral. Once an Augustinian Abbey, the Cathedral is an excellent example of a former abbey church given a new use after the reformation. Its location - despite being fairly central - gives it a tranquil, undiscovered quality: a meditative calm, with few tourists to disturb the peace.

The building itself was founded in 1140. The Chapter House, which dates from 1165, is the main survivor of this period, and this superb, richly decorated room is one of most important pieces of Norman architecture in England. Most of the rest of the church dates from a programme of rebuilding begun in 1298 and completed in the 1480s.

This rebuilding introduced some important architectural innovations. The first is the nave itself: the aisles are the same height as the nave, effectively creating a large pillared hall. This design, now known as a 'hall church', became the prototype for many similar buildings in mainland Europe.

In 1330, work on the Choir was begun, and here another innovation can be seen: the arches of the aisles have no capitals, and so sweep uninterrupted from floor to the apex of ceiling vault. The effect is to give an unusual feeling of space and gracefulness.

The Abbey was dissolved in 1539, and it became the city's cathedral in 1542. Much of the original nave was damaged at this time, and it had to wait for a Victorian restoration in 1877 and the completion of the west towers in 1888 for the building to attain its present shape.

The cathedral has a number of items of interest besides its architecture: there is a rare Saxon sculpture depicting Christ in the Harrowing of Hell (when the newly risen Christ descends to hell to assert his victory over evil, and release the souls of those who have not heard the Gospel), mediaeval glass in the Lady Chapel windows, interesting carved misericords (choir seats) from 1520, and an extensive set of tombs, including some spectacular ones of former Bishops.

After visiting the Cathedral, it's a pleasant walk around the harbour to the church of St Mary, Redcliffe, one of England's finest and most famous late mediaeval buildings.