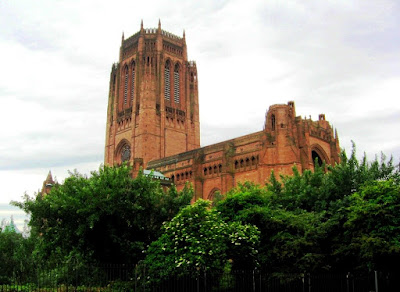 One recent week-end I managed to get my way long enough to visit to one of Britain's most iconic church buildings: Liverpool's Anglican Cathedral. It's a place of superlatives, and a visit is a must on any stay in the city. The building is simply huge, and impresses in scale if nothing else, with its internal height emphasised by the dark, red sandstone. Some can find this overbearing, others magnificent, but never forgettable.

Despite the late-Gothic style, this is entirely a 20th-century building. The diocese of Liverpool was created in 1880, but it was not until 1902 that a competition was held to design a cathedral in keeping with the wealthy and burgeoning port. Amazingly, the winner was just 22 years old, and still a student with no other buildings to his credit. But this was no ordinary student: Giles Gilbert Scott was the grandson of Sir George Gilbert Scott, the great Victorian church designer, and his father (also George Gilbert Scott) was a church architect as well. The building was literally to become his life's work.

Due to his inexperience, one of the competition assessors, G K Bodley, himself a well-known church architect, was appointed to work alongside him. The relationship was reportedly difficult, but after Bodley’s death in 1907, Scott continued alone. Scott’s design was for a huge Gothic church which would dominate the hill-top site at St James's Mount. The plan was conventional, albeit with double transepts, with twin west towers echoing those of Durham.

The first part of the church to be built was the Lady Chapel, completed in 1910, using traditional church building techniques in stone. As the cathedral slowly developed, Scott modified the plans, replacing the twin towers with a single central tower, and simplifying the Gothic detailing: the contrast between the intricacy of the Lady Chapel and the more monumental style of the rest of the cathedral is immediately striking. Another change was the adoption of reinforced concrete for the structure, clad in red sandstone, rather than continuing with traditional building techniques.

The choir and eastern transepts were completed in 1924, and the cathedral was consecrated in the presence of King George V. But rising costs, the 1930s’ depression and two World Wars hampered progress, and the cathedral was not finally completed until 1978, and a special service held in the presence of Queen Elizabeth II. Scott was not to live to see his great work completed: he died in 1960.

But there is no doubt that his work was great. It is the largest church in the UK and vies with St John the Divine in New York as the world's largest Anglican church: it is the third largest (by floor area) in Europe after St Peter’s in Rome and Seville cathedral, although it may be larger in volume. Its 101m (331ft) bell-tower is the largest (though not quite the highest) in the world, with the heaviest and highest peal of bells. The central space under the tower was also the highest until a recent clutch of skyscrapers were built with higher atria. But at 50m (161ft) it’s still impressive. The organ, with 10,268 pipes, is the largest in the UK, and the largest operational organ in the world. And so it goes on...

But this is more than just a building. The cathedral also has an active life of services, education, music and events to match its size, and is one of the most vibrant dioceses in the UK. A visit to a service to hear the sound of the magnificent organ reverberating through the interior is a truly memorable experience. Just as memorable is an ascent of the tower: 2 lifts take you most of the way, but the final climb involves 108 stairs. Thanks to its dominant position on St James’ Mount, the top is over 500ft above the River Mersey, and the views across Liverpool, the Wirral and Cheshire are stupendous.

There no doubt about it - this is a must see building.